(November 8, 2021) – A new report by Minneapolis Area REALTORS®, Minneapolis Housing Market: Are homeowners really “fleeing” the city? (Part ll), shows housing demand remains strong in Minneapolis one year after the pandemic and civil unrest rocked the city. The new report echoes the findings of the first report MAR issued in July of 2020. The latest market data from NorthstarMLS shows a surge in demand for Minneapolis homes compared to the surrounding suburbs. While listing activity had increased more in the city than in the suburbs, so too did buyer activity. There seems to be more turnover in Minneapolis, but not an exodus by any stretch. The Minneapolis market remains healthy and competitive, where homes are selling for often above list price and in near-record time. In August 2021, closed sales in Minneapolis reached a 16-year high. 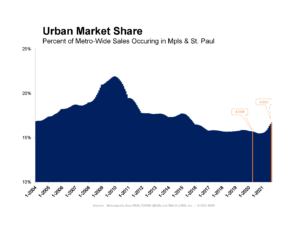 After a brief pull-back in the few months following the Covid-19 outbreak, sales in Minneapolis (and St. Paul) rocketed higher compared to the surrounding suburbs in the metro. These significant gains have led to an increase in urban market share. In fact, the percentage of metro-wide sales occurring in Minneapolis and St. Paul reached a six year high. Homes in the city are selling in near-record time, at record high prices and often with multiple offers. Additionally, sellers in Minneapolis have regularly received offers above their asking price due to multiple offers on a single listing.

“While concerns around the best path forward are evident, so are the energy and sense of community that have made Minneapolis such a vibrant place to live,” said Todd Walker, President of Minneapolis Area REALTORS®. “Despite some challenges over the last 18 months or so, home sales in the city would likely be even higher were there enough inventory to meet demand.” Other agents say that for every client selling their home in Minneapolis there are two or three interested parties looking to move in. Rising prices, the supply shortage and a desire for more space have forced some buyers to look well outside of where they might prefer to live in order to find a home that meets their needs and budget. This led to an increase in sales in the suburbs, but not to the same degree as Minneapolis. 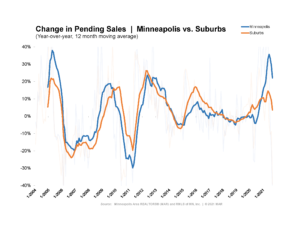 Between August 2020 and August 2021, home sales increased more in Minneapolis than in the suburbs. During that time, home sales in Minneapolis grew at up to ten times the rate of the suburbs. The condo market was harder hit early on, but over the last 12 months, signed condo contracts were up 23.8% percent compared to a 9.8% and 15.4% gain for single family and townhomes, respectively. The luxury market can also be a good indicator of market sentiment, and $1M+ luxury home sales in the city rose 49.1% compared to August 2020.The Minneapolis housing market has experienced a disruption as has most of the U.S. economy and most major cities. The market has remained strong after recovering from the initial downturn in 2020, and all indications suggest that will continue for the foreseeable future.