Hello! Thanks for joining us for another weekly market update, where we use MLS data to track the impact of COVID on the residential housing market. Today we begin with a piece of encouraging data that arrived last week. The Bureau of Labor Statistics released unemployment rates for large metropolitan areas. Believe it or not, the Twin Cities had the second lowest unemployment rate of any major metro area in the month of April. We were also one of only three other regions with an unemployment rate under 10.0 percent. This bodes well not only for our region and economy as we open back up but also for housing demand moving forward. Friday’s non-farm payroll report also showed an unexpected increase in jobs. It’s important to note that some who were temporarily laid off have come back, and that much of the gains were in the leisure and hospitality sector. 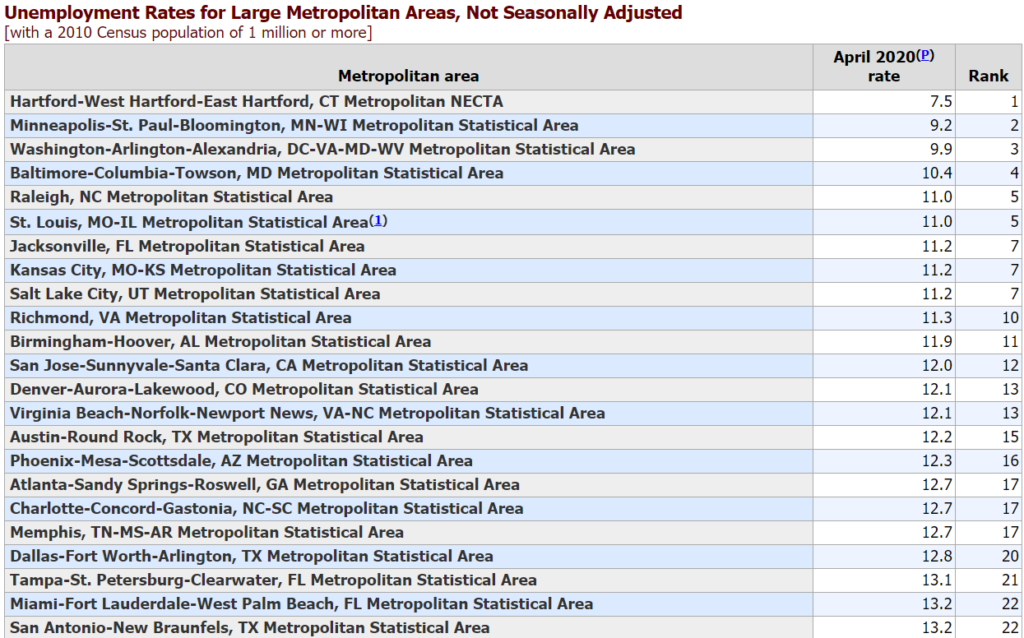 We noted recently that showing activity reached new highs around the end of May. The showing trend since then has closely mirrored that of 2019. By this time in 2019, showing activity had seen its high for the year. It’s likely we’ll follow suit this year, unless high levels of pent-up demand are unleashed, which could drive the numbers higher. It depends on the interest and ability of buyers to compensate for the pandemic-induced downturn. As an aside, note the size of the dip for the July 4th holiday. If enough fireworks and celebrations are cancelled and not as many people are up at the cabin, one wonders if we’ll see less of a dip. 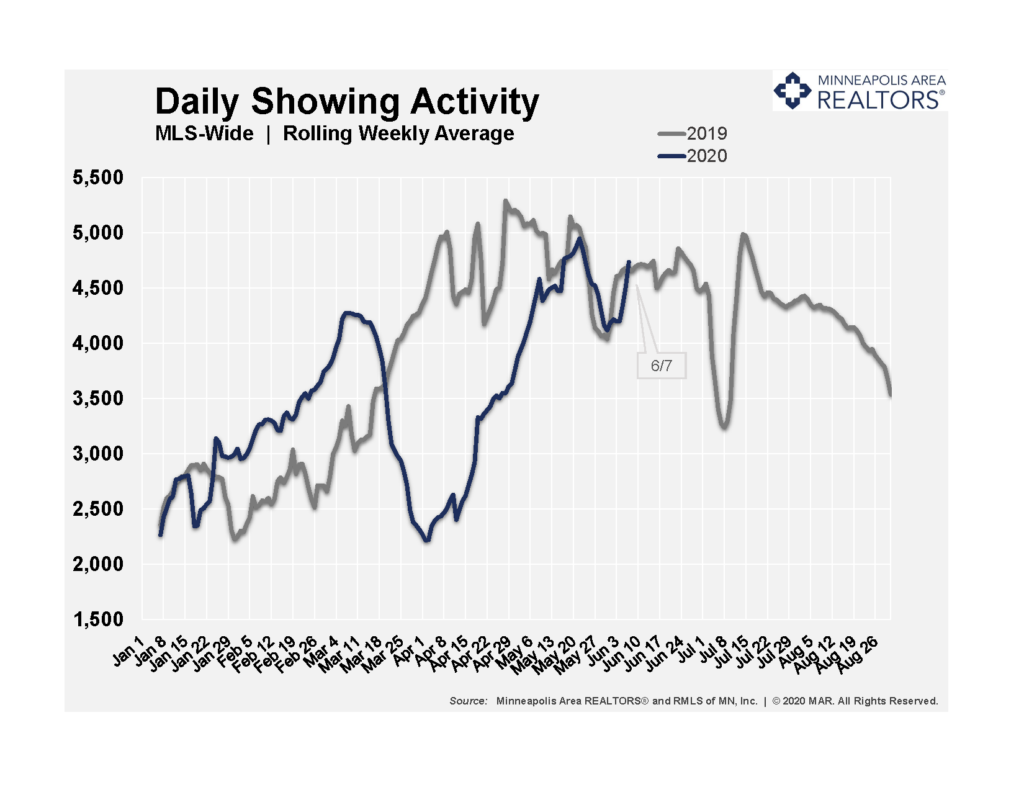 Diving deeper into showing activity by price point, it’s clear that showings were up across the price spectrum compared to the week prior. The only segment with fewer showings were on properties priced between $600-800K. Even though all but one price range saw gains in showings, the increases weren’t of the same magnitude. Thus, segments with rates of increase less than other ranges may still show declines in their share of overall showings. Most of the gains came in the three segments under $300K. Nearly two out of every three showings occurred on properties price under $300K. 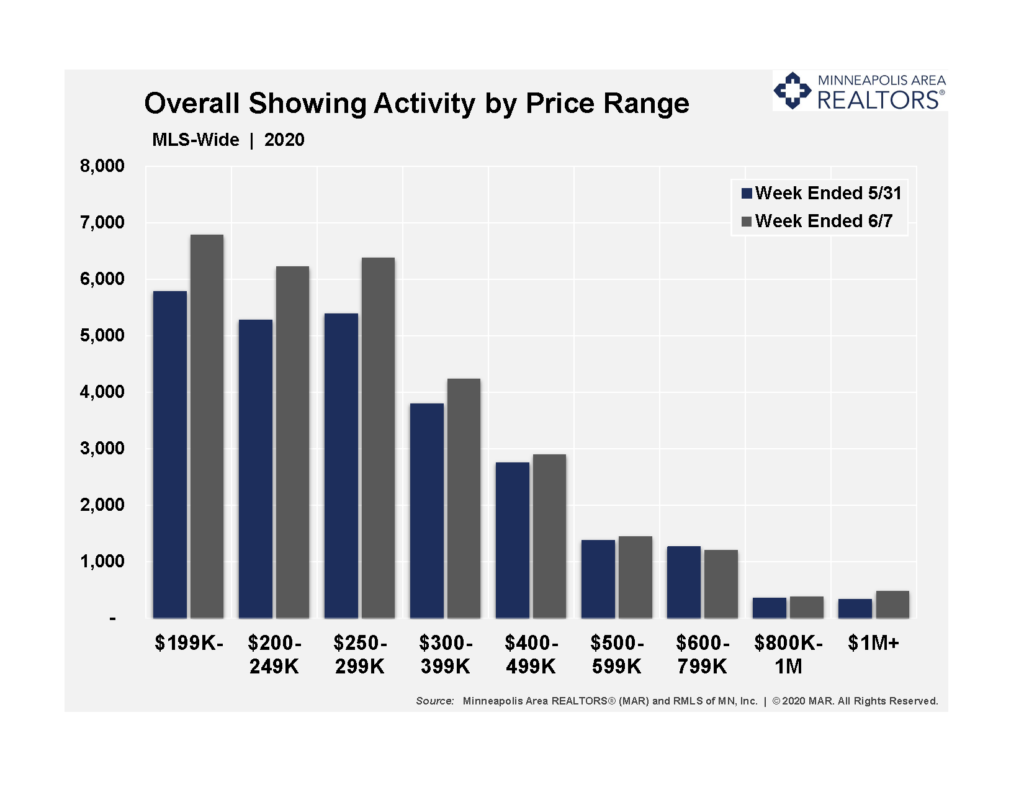 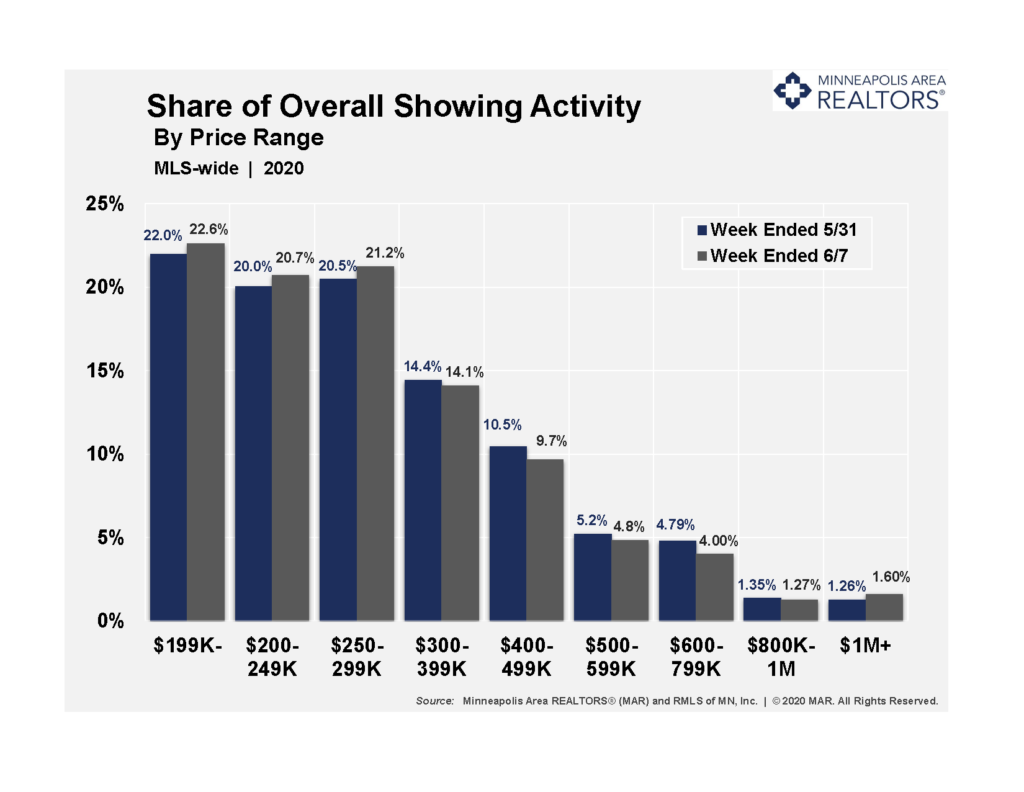 Looking now at the change in showing activity by price range, the largest gain came in the $1M+ range, which has been a volatile segment because of small sample size. Once again our three affordable segments under $300K showed solid gains. The only segment with fewer showings this past week than the week prior was the $600-800K range. 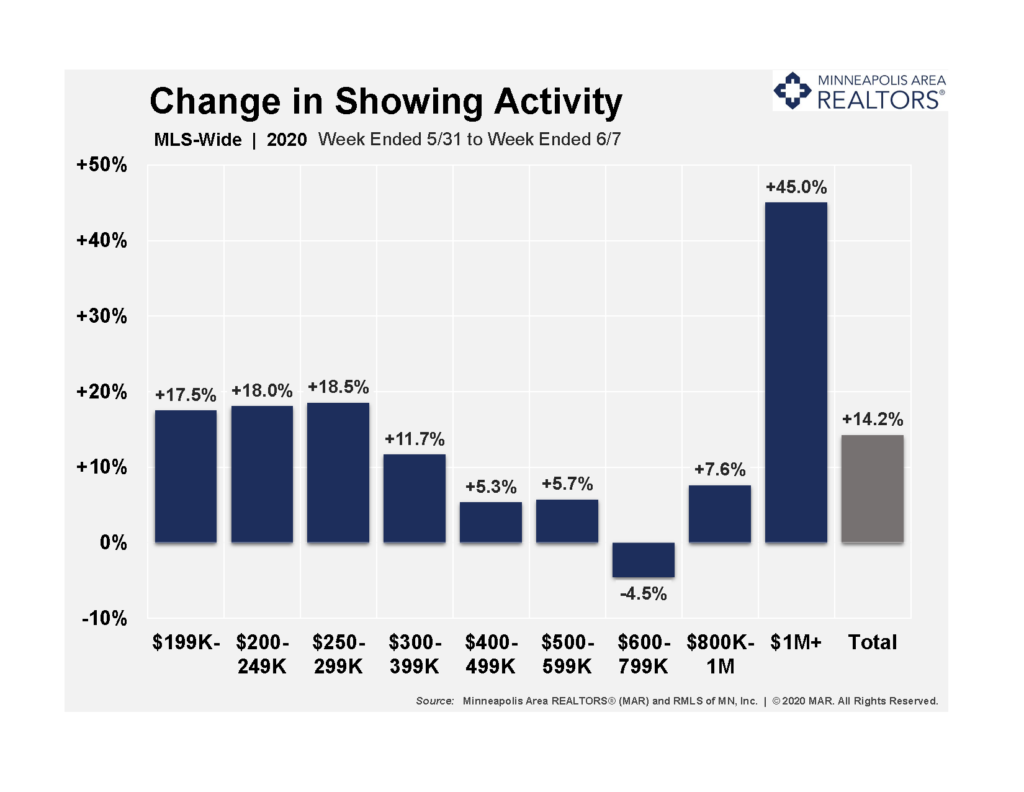 Pivoting now to actual buyer and seller activity, we can see how the 2020 new listing trend has more or less reflected past years. It’s possible the most recent divergence is partly due to recent events and unrest in the region, though it’s impossible to say without surveying a broad cross-section of sellers and would-be sellers. 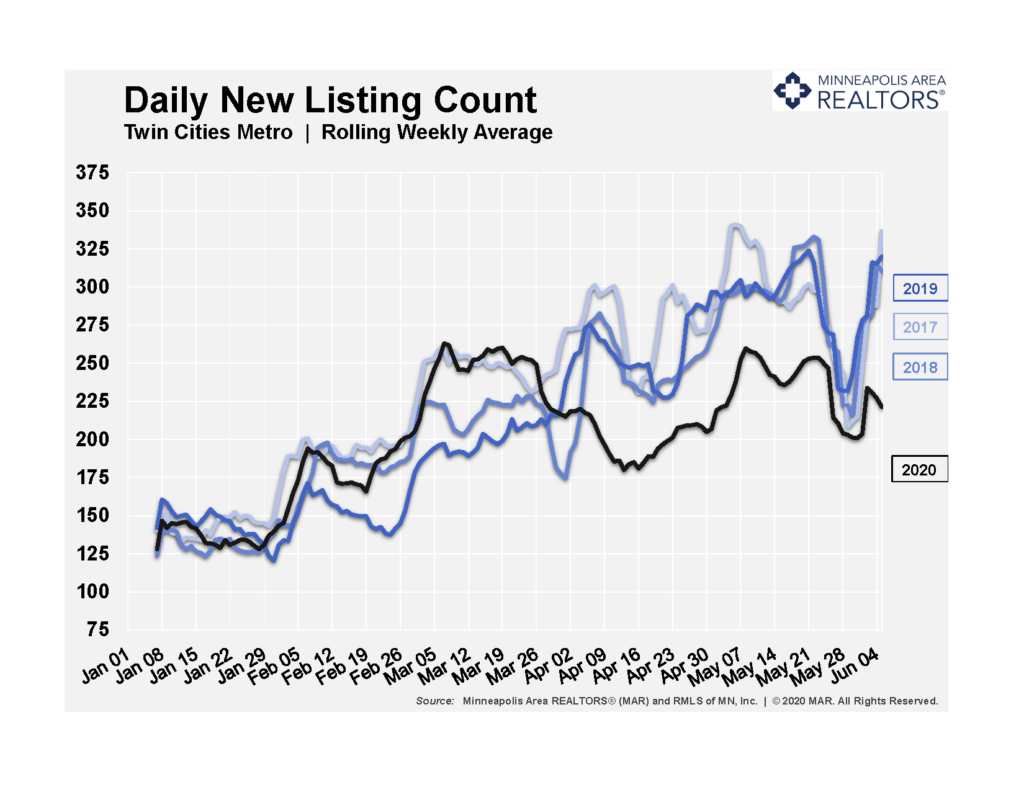 The pending sales trend has also continued to reflect the trend from the prior three years. Perhaps we notice a small divergence in the latest numbers that could be caused by a variety of factors. Notice how the pending sales trend has reached new highs for the year while the new listing trend has not. This and other data points support the fact that buyers seem more motivated than sellers, which could further pressure an already under-supplied market. 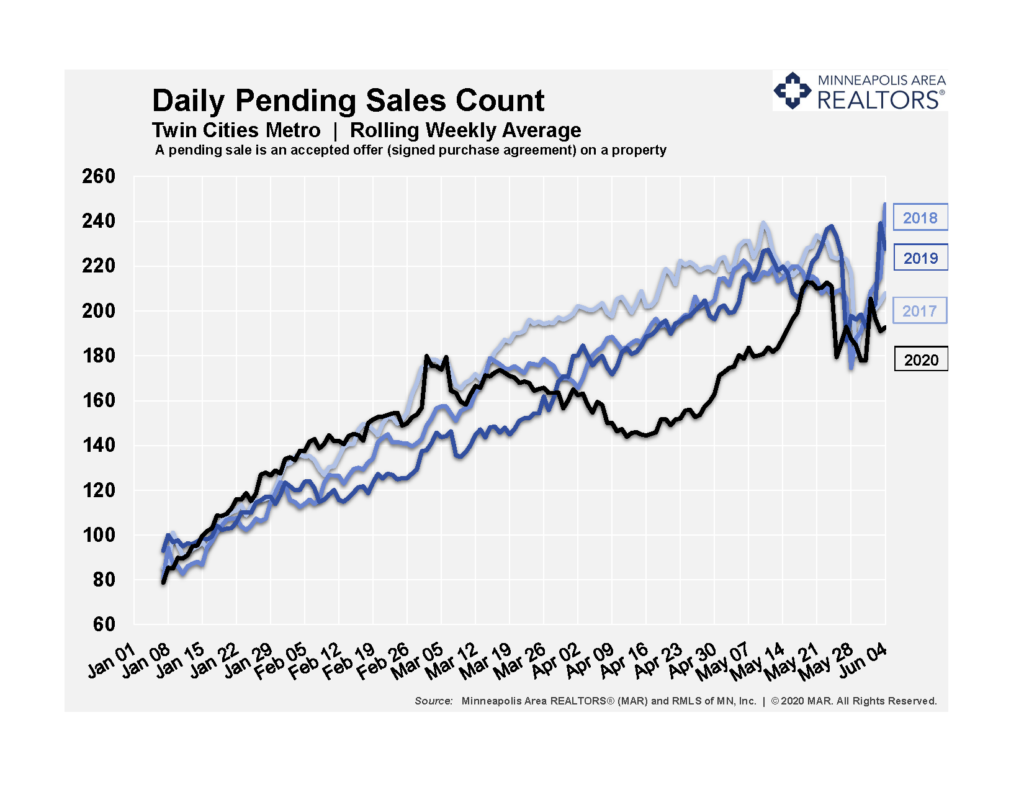 These final two visuals show year-over-year change in new listings and pending sales by price range for the most recent week versus the same week last year. These can sometimes show different trends than the week-to-week charts. Here we can see that new listings were down about 33.0 percent overall from last year, but the largest declines were in the affordable brackets and the most exclusive luxury bracket. The first or second move-up market performed the best; sellers listed just 1.0 percent fewer homes between $500-750K than the same week last year. 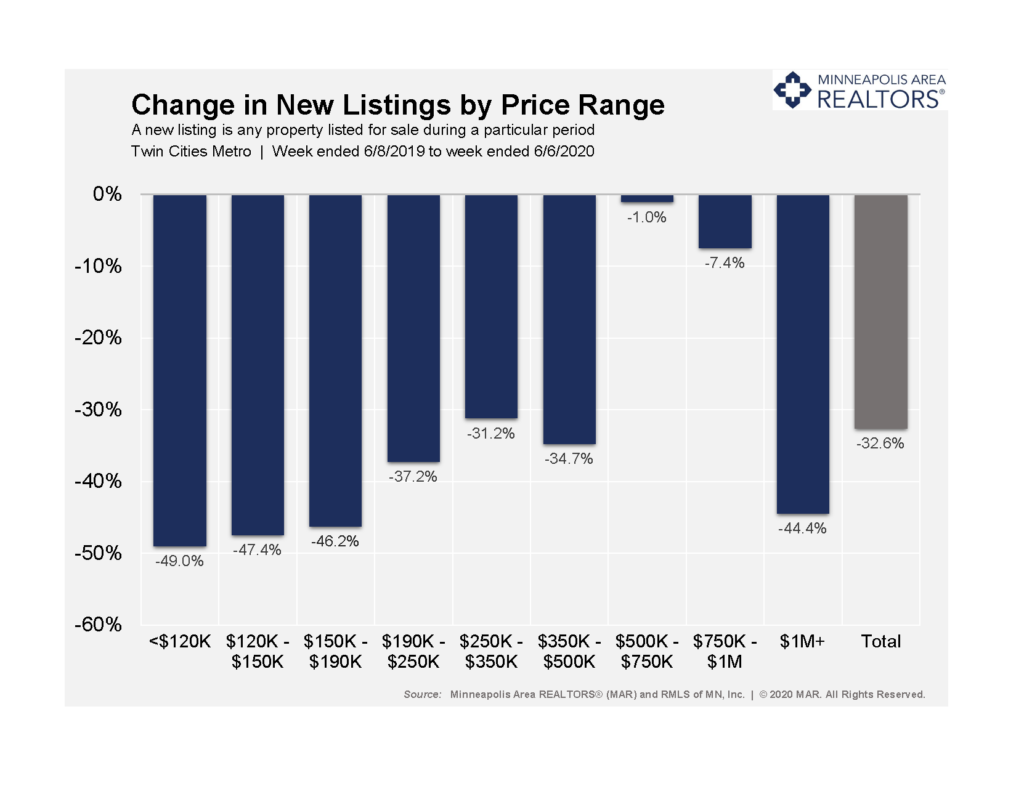 Unlike new listings, signed purchase agreements actually had some gains from the same week last year. There were more pending sales between $120-150K, $350-500K and $500-750K. Overall, there were about 11.0 percent fewer pending sales compared to 33.0 percent fewer new listings. Once again, we see that upper first-time buyer segment and perhaps that first or second move-up segment performing relatively well. Mid-level professionals who are able to work from home and haven’t experienced job or income loss may be taking advantage of near record-low mortgage rates. 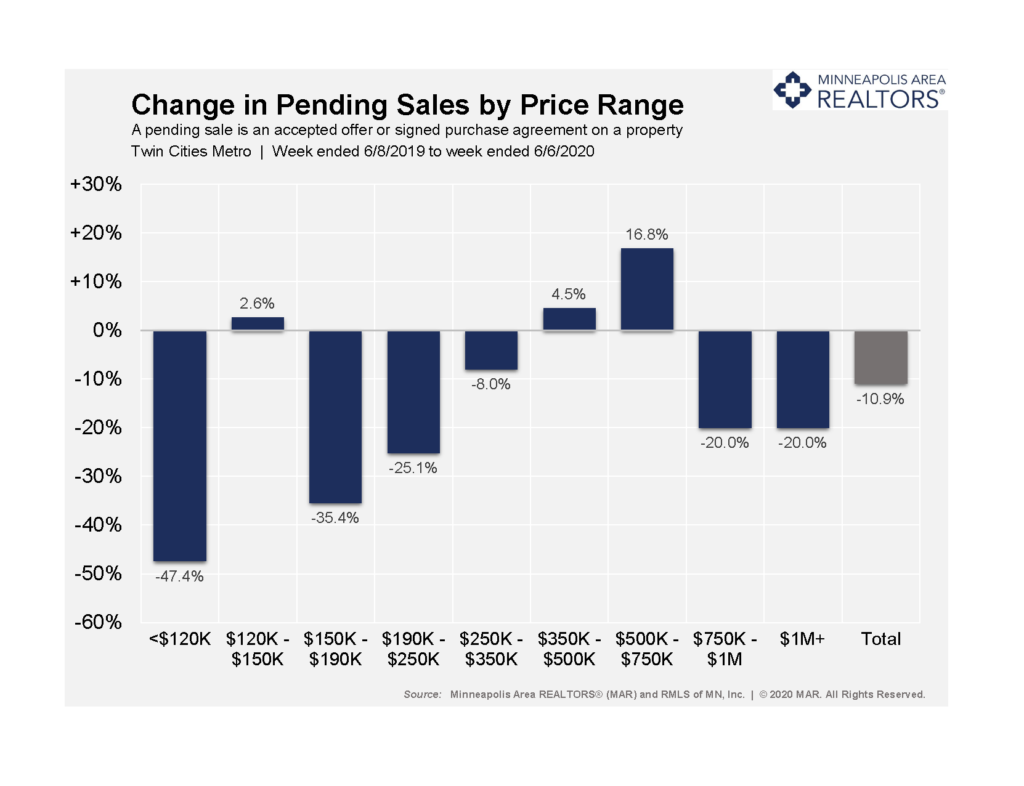 Thanks for reading and be sure to tune in next week.

Join MAR’s Director of Research and Economics, David Arbit, for a free weekly 1 hour presentation and discussion around the impact of COVID-19 on the Twin Cities real estate market Thursday, June 11, 2020 (2:00 PM to 3:00 PM). Registration is required.