Hello and thanks for joining us on another weekly data adventure where we track the impact of the pandemic on the residential housing market. This week’s edition is truly one “for the people.” Every one of today’s data visualizations is based on information that every licensed agent can access. In other words, with a little curiosity, patience and determination, you can recreate any of these at any time. Some come from our weekly report, some from Infosparks and the showings trend is derived from information within the showings system of Northstar. Today we’ll start with showings, then we’ll move on to some weekly numbers before taking an early look at some unofficial April numbers from Infosparks.

Below is our showings trend (no labels, no strings, just seeing where things go). After a significant decline in showing activity that began mid-March, the recovery that started in early-April has nearly brought us back to break-even with our local peak for the year so far. The current rolling weekly average is 3,950 showings compared to 4,275. Another 10.0 percent increase and we’ll be at break-even. And we saw a greater than 10% increase from the week ending 4/26 to the week ending 5/3. 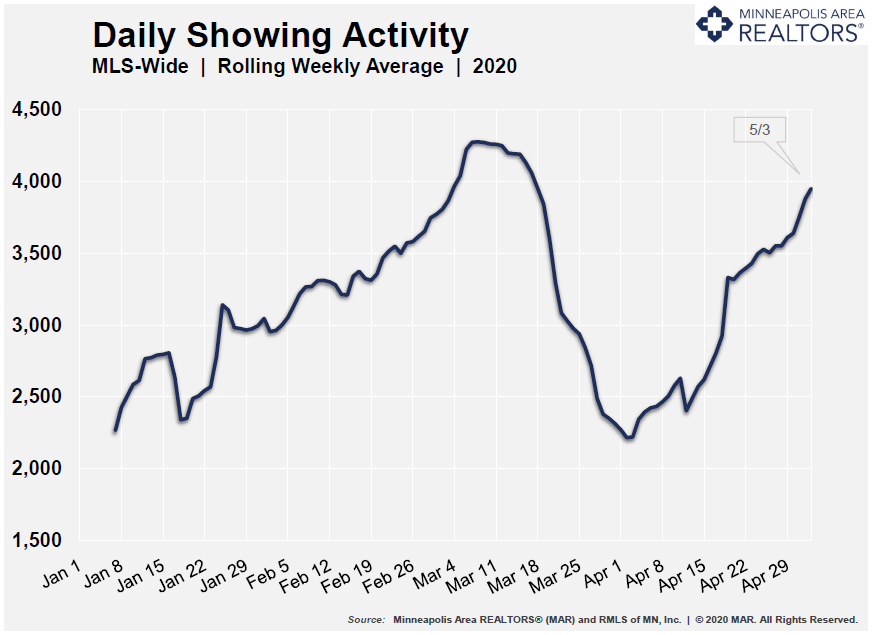 Next we have our new listings or seller activity trend for current and prior years, straight from our weekly market activity report. There’s more positive news here—after stabilizing previously we’re now seeing a noticeable increase in new listings. It’s still too early to proclaim that the worst is behind us, but this is definitely positive. 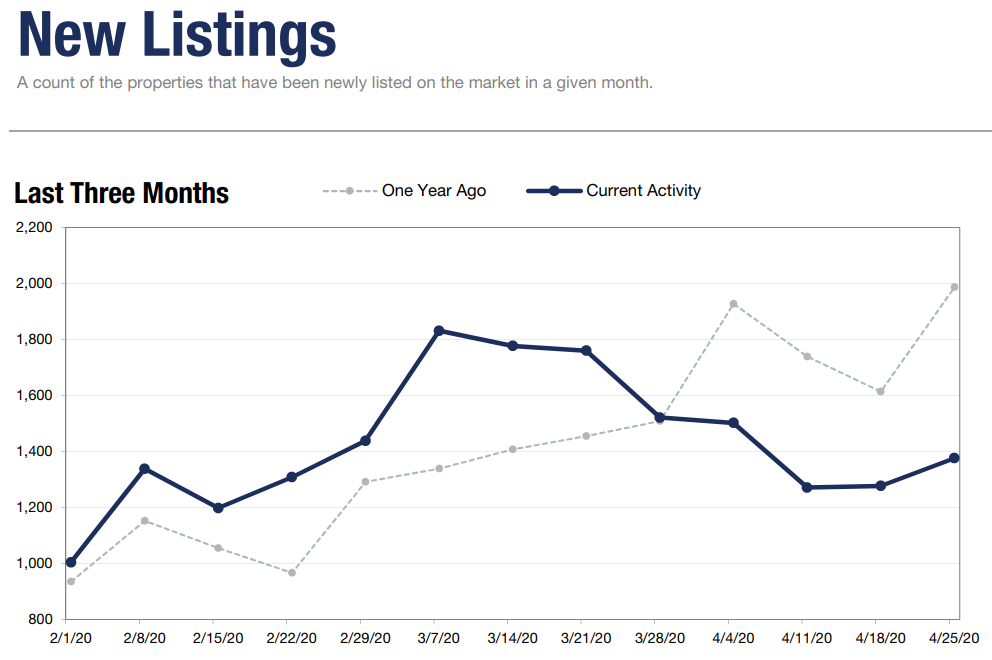 Our weekly pending sales trend from the same report also showed decidedly positive movement. This early demand indicator that typically precedes closed sales activity also turned up  for the first time since the week of March 7 to March 14. So both buyer and seller activity rose from the week ended April 18 into the week ended April 25. It should also be noted that although both new listings and pending sales are still below their peak for the year, they’ve remained in positive territory on a YTD basis. That could easily change depending on how May and June play out (and beyond). 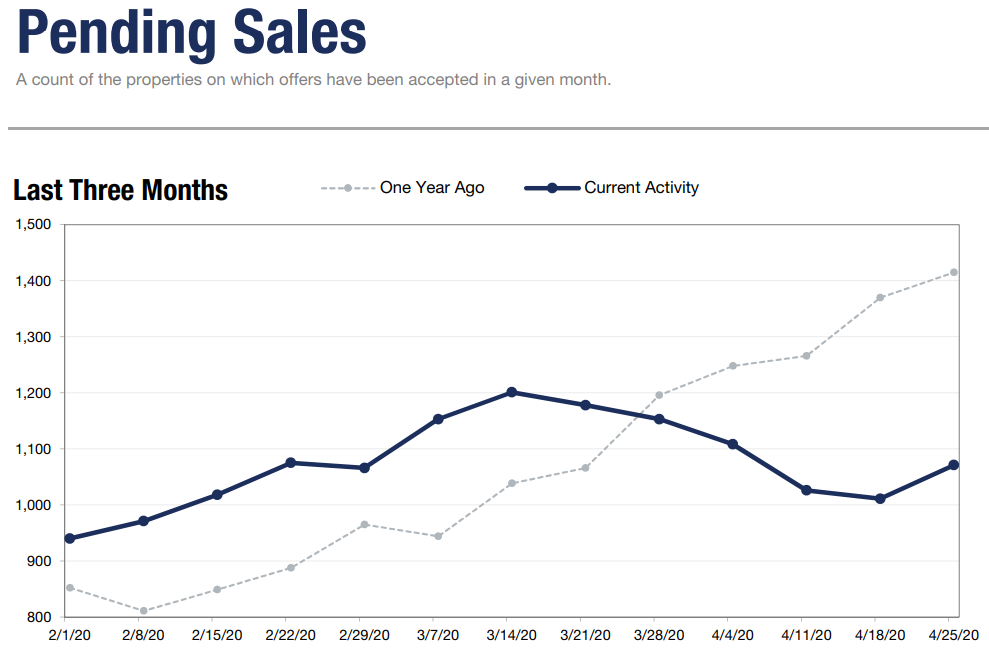 Now we move into some preliminary figures from Infosparks within Northstar. First of all, why do we call them “preliminary?” Our official numbers are released in our monthly reports, particularly our Monthly Indicators report. There, we allow ample time for status changes to make their way through the MLS system and into our data and reporting. We release those numbers in our regular monthly press release so the media can be our partners in getting the word out about the housing market as well as the value of using an agent and of the MLS. Hence, these are an early glimpse. While these figures are usually pretty established, expect to see some slight movement in certain metrics once the official numbers come out. Infosparks updates figures the day after the close of the month while our official reports come out around mid-month.

Here we can see (preliminary) new listings broken out by price range. It appears as though our middle-market theory still holds water: the bottom and top of the market have declined more than the middle. It’s important to “benchmark” any change with the market as a whole, which are the bars in brown off to the right. The largest decline in seller activity came from $1M+ sellers. Homes priced between $250-500K only saw a 17.9 percent decrease.

We can also see from the chart below that condo new listings experienced a nearly 41.0 percent decline, while new listings of single family and townhome units declined about half that much.

With weather and interest rates cooperating, builders entered March on a strong footing. They were able to get nearly 13.0 percent more newly-built homes listed than last April. For existing and previously-owned homes, new listings were down almost 30.0 percent. 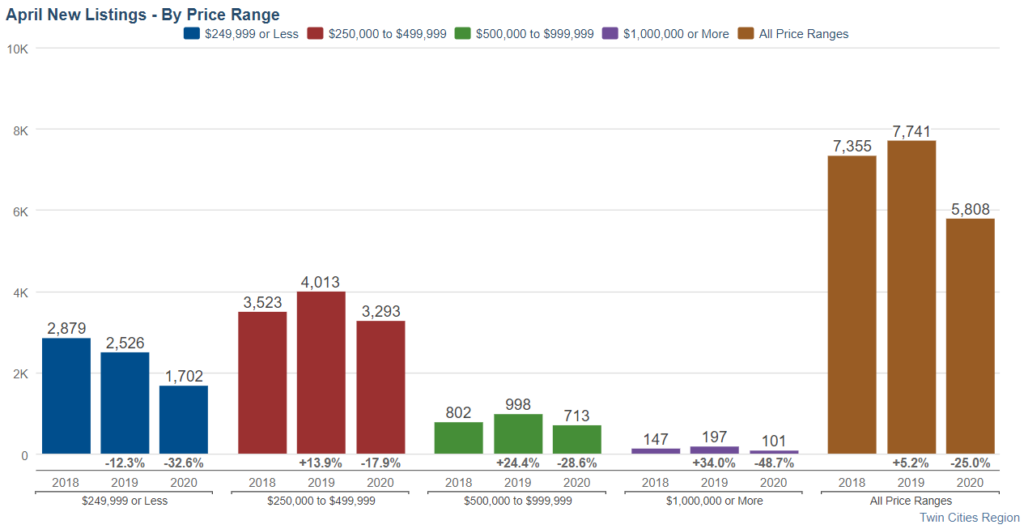 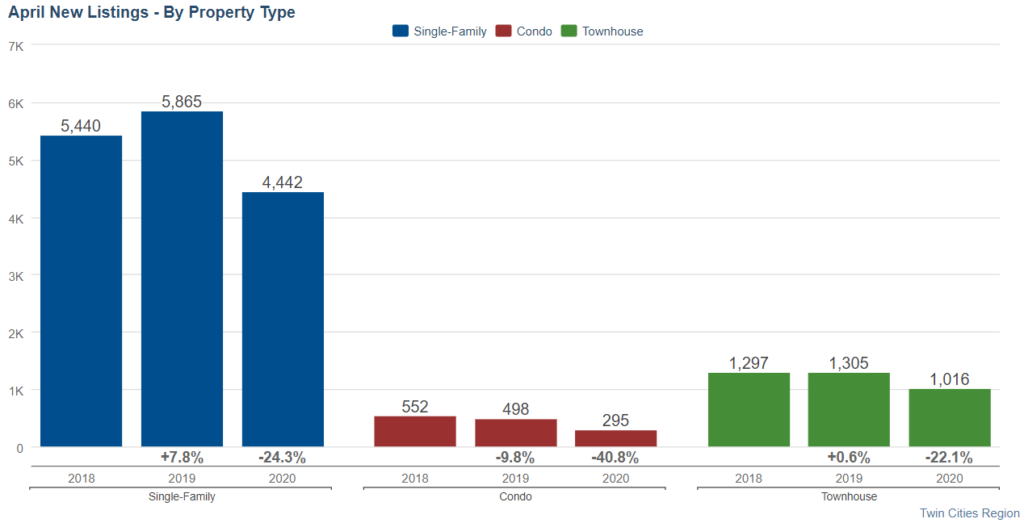 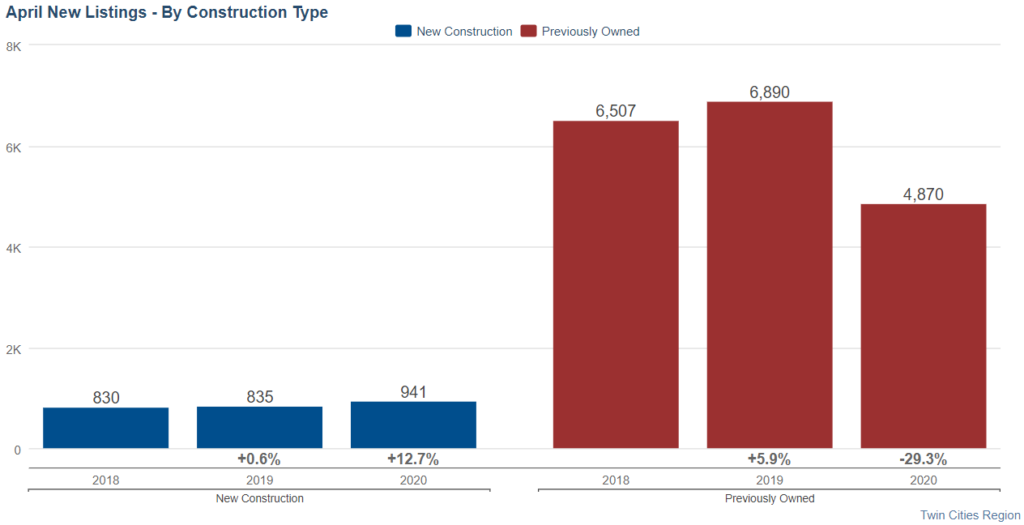 Like new listings, condos also saw the largest year-over-year decline in pending sales with a 50.5 percent dip. Single family pending sales were down a comparatively small 15.3 percent, and there were 31.6 percent fewer purchase agreements signed on townhomes.

Also similar to new listings, new construction pending sales were down just 3.9 percent compared to a 22.2 percent decline for all existing or previously-owned homes. 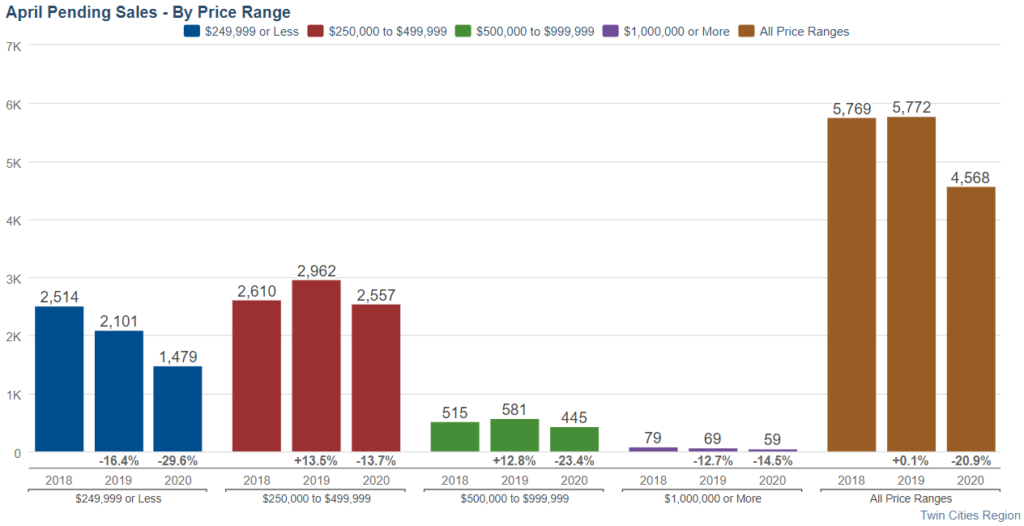 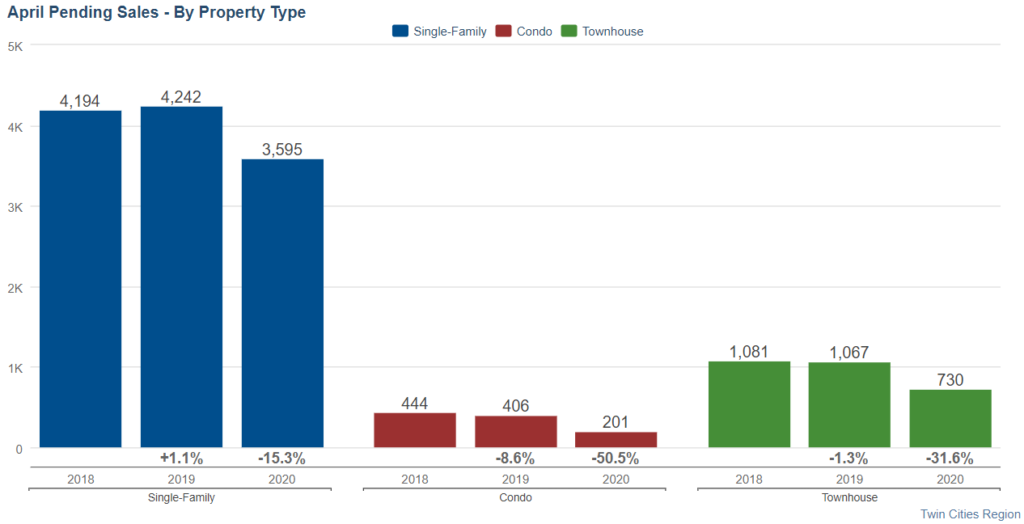 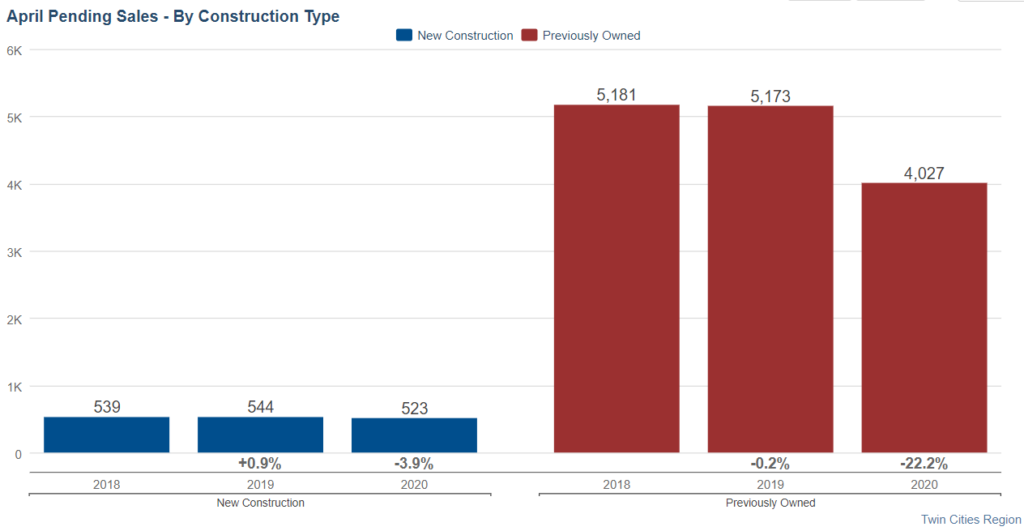 Before we close, it’s also worth noting what didn’t happen in April. No market segment showed a year-over-year price decline, except new construction. And it was mostly reduced building footprints and less luxury market activity driving that change. There’s a chance this could change in the coming months, and we will keep you informed.

May the 4th be with you! (and also with you)

Thanks for reading and be sure to tune in next week.

Join MAR’s Director of Research and Economics, David Arbit, for a free weekly 1 hour presentation and discussion around the impact of COVID-19 on the Twin Cities real estate market Thursday, May 7, 2020 (2:00 PM to 3:00 PM). Registration is required.