It’s Monday, which means it’s time for another special weekly market update from the MAR Research desk. Let’s start at a high level and look at year-over-year change in new listing and pending sales activity. Some of our other research looks at change in activity from week-to-week, but our Weekly Market Activity Report (first two images below) shows year-over-year change along with the current year and year-ago trendlines. The decline in activity has finally made its way into our weekly report. This report lags a bit and only shows activity through 3-28. Note the current year trend in blue has crossed below the prior year in grey. 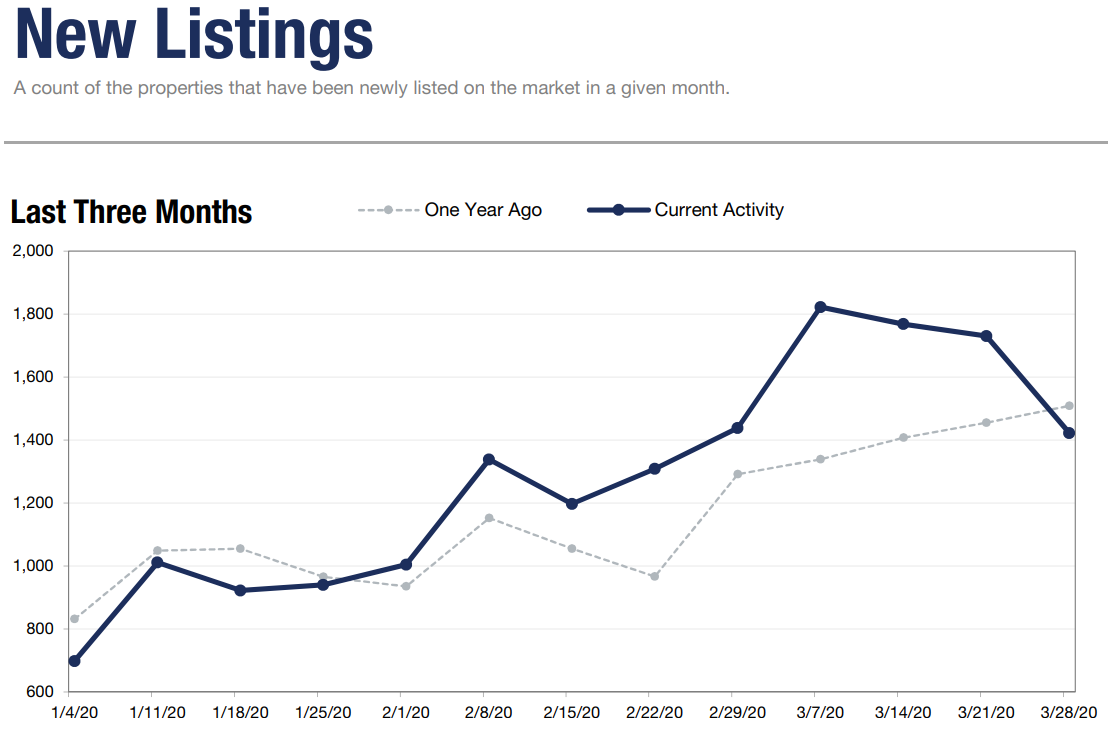 Similarly, on a weekly basis, pending sales just fell below last year’s levels for the first time since the beginning of the year. Some may note that the current blue trendline was hovering well above the prior year trend for most of this year. It’s important to remember that the heavy snow and fast melt in Spring 2019 held back both buyer and seller activity, so it’s not quite an apples-to-apples comparison. 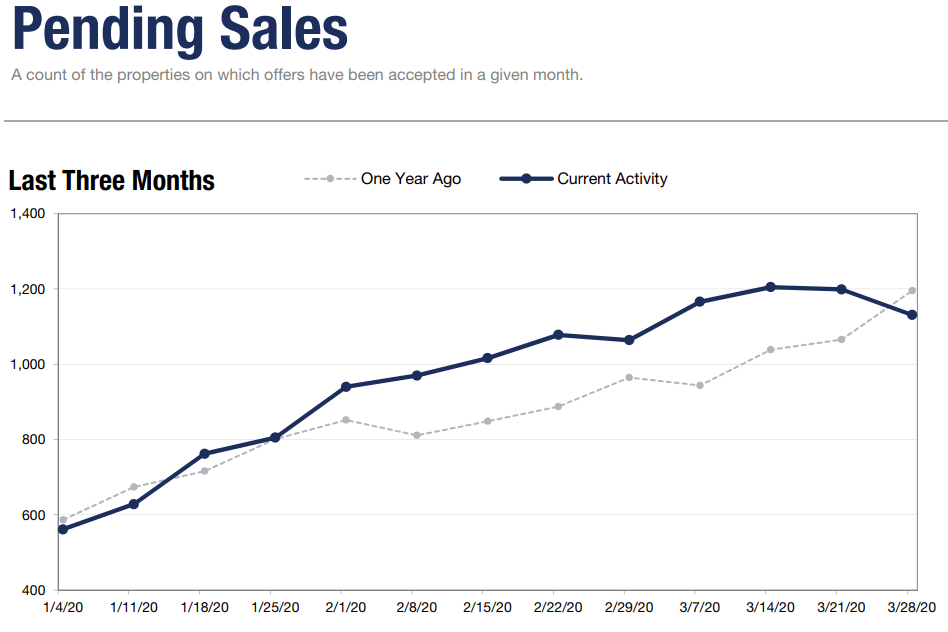 Now let’s pivot to showings. Showings have served as an excellent and early indication of what changes in market activity might be coming next. The decline in showing activity around March 16th preceded the decline in signed purchase agreements and new listings that followed. The image below highlights not only the rolling weekly average showings trend, but also notes important milestones along the way that clearly had an impact on showing activity. The growth in showing activity halted abruptly just after the first confirmed CV-19 case in MN and began declining sharply after the state of emergency declaration and school closures. It appeared as though the decline was leveling off before re-accelerating to the downside after the shelter-in-place order. That said, April 2nd and 3rd appear to have formed somewhat of a valley lately, which is a good thing. It’s far too early to say for sure, but perhaps we’ll look back at this early April valley as the time when things turned around. It is an encouraging sign that showings are up for two days in a row (based on this methodology), as that’s the first time in over a month when that’s happened. 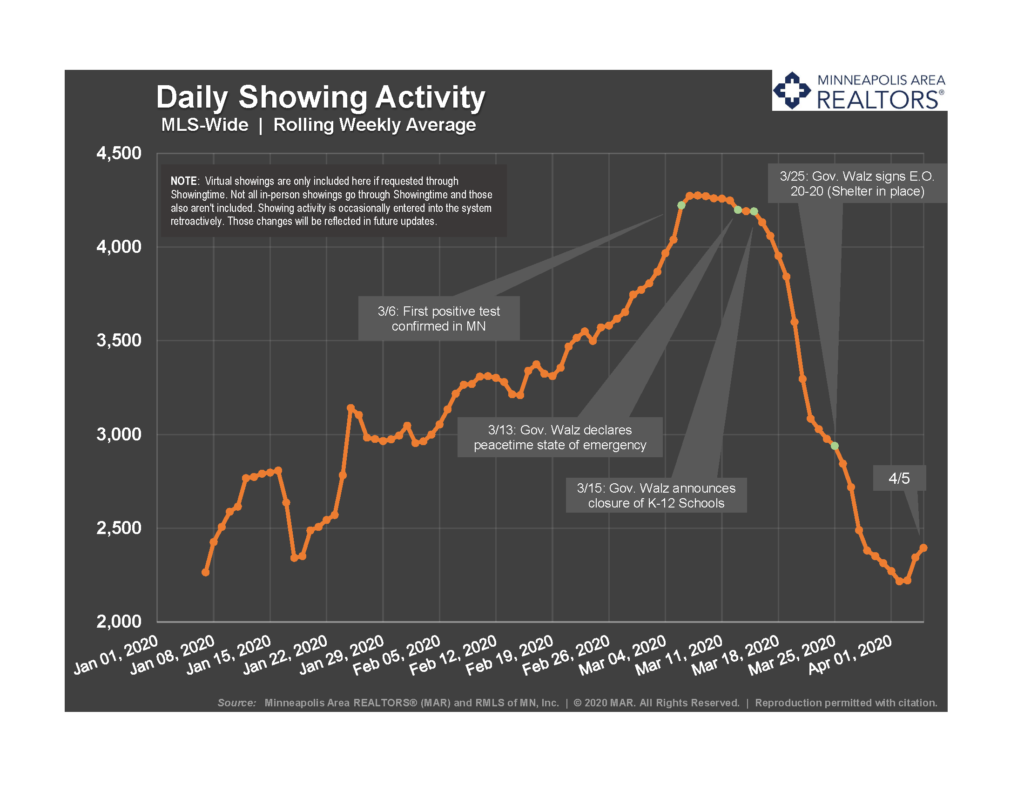 But if only things were that simple. Since market activity can vary dramatically by price point, it’s important to break down showing activity by price bracket. This illustrates the overall showing activity trend by price range for the weeks ending 4-5 and 3-29. 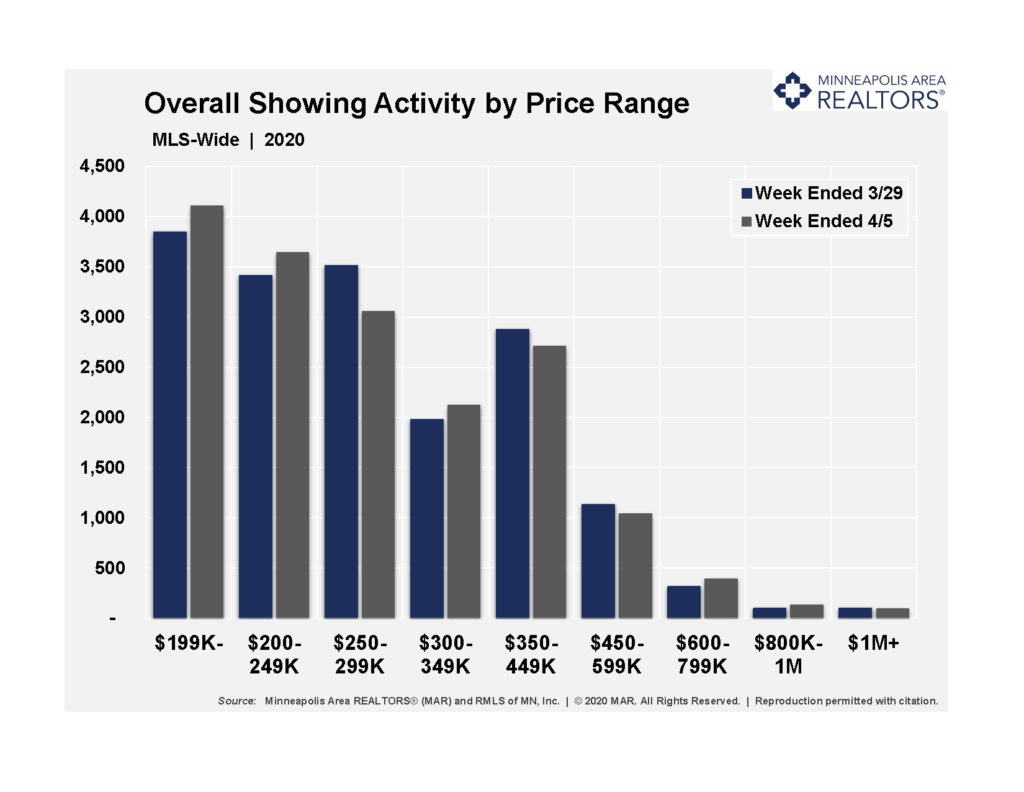 If you’re now squinting, zooming and wondering which ranges were up and down, fear not. For there’s a chart for that. This one highlights the change in showing activity by price range from the prior to current week. Perhaps some would be surprised to learn that the luxury brackets have actually seen stronger gains in showing activity than the more affordable or first-time buyer segments. It’s also worth noting that the luxury segments were hit hard and fast and are fairly thin markets with limited transactions. Hence, not only can a few extra showings really move the needle in a thin segment, but the significant declines over the previous weeks now means we’re comparing against a suppressed baseline. In other words, perhaps the current activity isn’t as strong as the prior week activity was weak.

Yet another interesting data point (aren’t they all fascinating?!) is how has the share of overall showing activity changed between price ranges. Sometimes it’s difficult (read: almost impossible) to impute how the share of activity within each segment has shifted given the change in overall market-wide activity and within each individual segment. Think of this as the “market share” chart, answering the question “which price range has the greatest share of overall showings activity and has that changed from week to week?” Note the gains in the under-$250K ranges and the “perhaps surprising” decline between $250-300K and the “perhaps surprising” gains in the $600-800K and $800K-1M ranges. 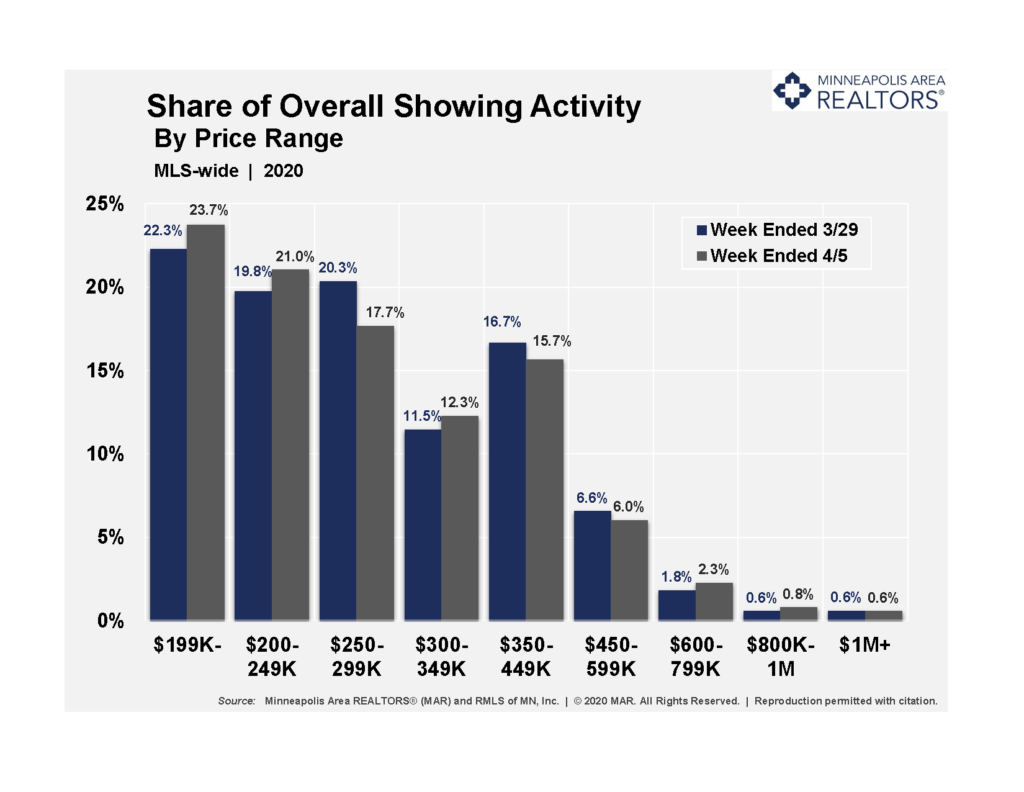 The final two visuals demonstrate how 2020 has performed compared to the prior three years for both seller and buyer activity. For new listings, 2020 activity finally dropped below 2018 to take last place of the four years included. There is some evidence the trend seems to be leveling out, but it’s too early to be sure. 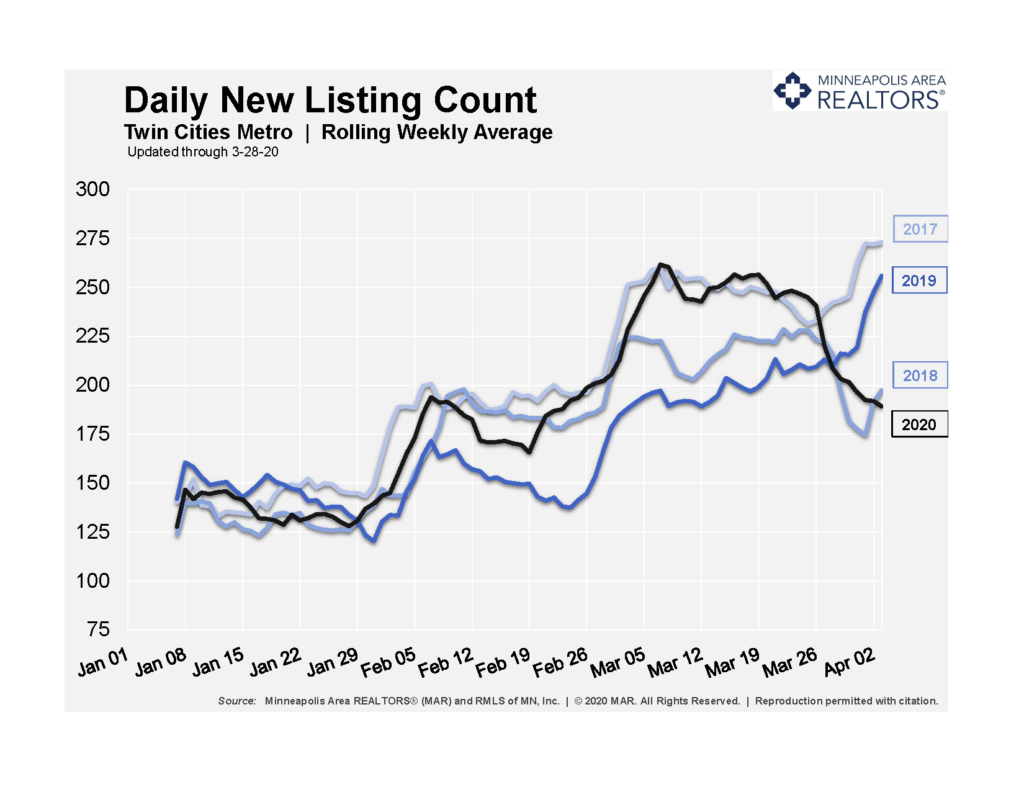 Lastly, the slow decline in pending sales has continued steadily since the downtrend took hold around March 19th. Pending purchase activity in 2020 is now the lowest of the four years included in the analysis. But then again—perhaps surprisingly—not by much.